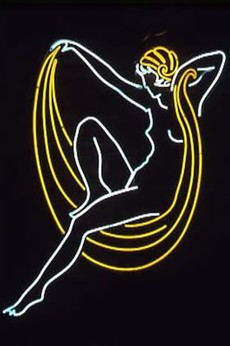 In 1992 after 15 years of running a successful neon gallery, Say It In Neon, on Hudson Street in New York City, my partner Michael Collins and I purchased the former Methodist church building in the hill town of Colrain, in Franklin County, Massachusetts, where we live today.

We were concerned that no one would come to Colrain to see neon. I said to Michael, "Cook something, make a salad, sandwich, something. You're a chef." And so we opened the Green Emporium Restaurant/Gallery on June 9th, 1994.

Suddenly we are in the restaurant business and quite a successful one! People began to come from all over to enjoy Michael's "Country Fusion" Cuisine and to see my neon. I feature my work mostly on the large interior walls of our restaurant, and in the choir loft where I have a collection of antique neon clocks amongst other neon art works.

My works are published in many books around the world. One of the latest is The Best of Neon, by Velma Bar. Local galleries feature my works as well: The Hart Gallery in Northampton, The Art Bank in Shelburne Falls, and the Herter Gallery at the University of Massachusetts.

Recently, after a fire that destroyed Pine Hill Orchards showroom and restaurant, I began a series of outdoor installations on the theme of the fire itself. Using found objects from the fire, I created "Embers" from the burnt apple crates, "Jubilation",from an abandoned plastic-covered greenhouse, and "Phoenix", from the roots of a tipped over tree along the outskirts of their pond.

It was while working at Pine Hill shortly after September 11th, that a local farmer, Kenny Shearer, approached me about his idea for building an American flag on a hill on his property. He asked me if I would be interested in doing it in neon. Our collaboration led to the creation of "Glowing Glory", a 28' by 16' illuminated neon American flag - Old Glory by day, Glowing Glory by night. The new American Pride of Colrain, funded and supported by the people of Franklin County, is the largest permanent neon flag in Massachusetts.

I am continuing to create installations at Pine Hill Orchards, and have upcoming shows at several galleries in the area. Bookmark my web site and visit often for updates on my latest installations.